El Pueblo’s leadership and team demonstrate a deep commitment and understanding of community needs. This past year, they quickly pivoted to help with food distribution, vaccination stations, and vaccine education. 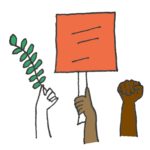 📈  North Carolina’s Hispanic / Latinx population grew by 40% between 2010-2020, compared to 23% nationally. They are the fastest growing racial or ethnic group in the state.

⛔  And although Latinx-owned businesses are the fastest growing segment of the U.S. small business ecosystem, they are significantly less likely to get a bank loan approved than their white counterparts.

Behind the Term Latinx

👂 While Hispanic and Latino are the two dominant pan-ethnic labels used in the U.S., Latinx is a newer, gender neutral alternative.